JOURNAL OF INTERDISCIPLINARY STUDIES
Vol. XXIX 2017
THE FUTURE OF RELIGION:
Re-Enchantment of the World? 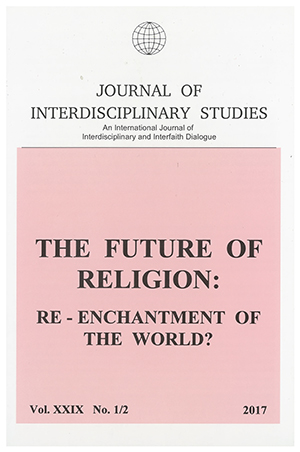 THE  QUEST FOR MEANING AND REDEMPTION (Editorial)

This 29th volume in the thematic series of the Journal of Interdisciplinary Studies, focusing on “The Future of Religion: Re-Enchantment of the World?,” celebrates the life and thought of John Paul II.  The extraordinary legacy of this Polish philosopher-poet-playwright-pastor-Pope, a true Renaissance man, is of special relevance to a postmodern civilization bereft of absolutes and transcendentals.  Indeed, John Paul’s quest was for a transcendent grounding of individuals and communities in a world characterized by what Charles Taylor in A Secular Age calls “the malaise of modernity,” engendering meaninglessness and existential Angst.  It is clear by now that secularism and atheism offer no Archimedes point for normative standards, ethical choices or orientation for human existence given a prevailing seductive materialism, the aridity of scientific reductionism, and the consequent disconnection between the individual and community, the isolated (“buffered”) self and God.

THE  SPRINGS OF RELIGIOUS FREEDOM:
CONSCIENCE AND THE SEARCH FOR TRUTH

John Paul II frames the issue of disenchantment and re-enchantment in terms of “alienation” and “participation”–various works of human power recoil upon the person and inhibit full human development and participation.  The neglect and distortion of human rights is one such form of alienation indicating the deeper issue concerning human flourishing.  John Paul encourages a radical questioning about human progress so as to better understand the threats that accompany bureaucratic increase in power.  Aspects of cultural and human development offer a challenge to mankind to overcome alienation and to participate in community and social love.  Through an appeal to the Spirit, and the search for truth, goodness, and beauty, John Paul seeks to open up a lived path to God by way of the person’s transcendence.

JOHN PAUL II IN THE LIGHT OF THOMAS AQUINAS:
PERSONALISM, MERCY AND THE QUEST FOR HOLISTIC EXISTENCE

In the quest to understand the meaning of existence, the human being is torn between many choices, exposed to individualism of all forms, especially atheistic perspectives.  John Paul II’s personalism in the light of Thomas Aquinas’ personalistic notion of mercy suggests an alternative of meaningful living, co-existence, and holistic transcendence.  John Paul’s search for the basis on which individual and social rights may grow and enhance human dignity demonstrate the ontological human worth. Following Aquinas’ model,  John Paul shows that human dignity takes precedence over all options and needs preservation.  Similarly, Aquinas’ classification of the human person as “rational subsistent” portrays this dignity in “effective mercy” that allows one to thrive in all kinds of existential vicissitudes.  This essay explores John Paul’s personalist notion of mercy reflecting Aquinas’ model in the contemporary milieu in view of holistic existence.

The modern problematic, defined by Kenneth Schmitz, is a widespread acceptance of God’s absence in the culture of the technologically advanced Western societies.  Schmitz clearly has been deeply influenced by Karol Wojtyla’s work as both philosopher and religious leader.  Pope John Paul II’s Fides et Ratio is notable for its courage in advocating the serious pursuit of truth guided at least in part by the philosophy of being.  This essay draws on certain important contrasts in Schmitz’s subsequent meditations upon the transcendental of beauty and its implications for communication and postmodern culture with its emphasis on the human subject.  The purpose is to reflect on the special significance of this important contrast, shift, and development that occurs in these aspects of Schmitz’s own philosophy within the tradition of the philosophy of being that has been given renewed definition and importance for our challenging times in John Paul II’s encyclical on faith and reason.

A THEOCENTRIC VISION OF CULTURE IN JOHN PAUL II

This essay explores John Paul II’s intellectual legacy as a champion for a theocentric view of culture that emphasizes the human person and human dignity in quest for human self-realization in a community that seeks the transcendence of God.  His theopocentric vision for culture is defined in the context of the teaching of the Second Vatican Council. John Paul’s theological anthropology is grounded in personalism, communion, dialogue, and freedom. When God is eclipsed from human activity, particularly via the “shadow” of secularism, it engenders the crisis of culture.  John Paul’s articulation of dialogue emphasizes inculturation and evangelization.  His Trinitarian and social encyclicals reflect a theocentric and anthropocentric vision for culture, while his Polish and literary background show his thoughts on culture not as teachings but as integrated into his life experience. The essay concludes with reflections on Mary and the challenge of dialogue in a multicultural world.

ON PHILOSOPHY AND ENCHANTMENT

Philosophy is the work of reason as it seeks to know the truth of what is.  Philosophy begins in intuition and ends in argued conclusions.  But we can know reality only after its own manner.  The inner lives of human beings can only be known by their being told to us, revealed to us.  All of reality bears its own fascination if we know how to see it.  What life is about is seeing it, then on seeing it, living with it, or perhaps not seeing, to live without what we should have seen.  Only individuals who think and who can see relationships between things can be charmed by them.  They alone can see in real things intimations of more than they can grasp by themselves.  The “en-chanted” world was a world in which, everywhere we looked, we found traces, footprints of the divine or at least of story, intelligence, and order. Enchantment and intelligence support each other, both are needed for a knowledge of the whole.

The thesis of this essay is that Karol Wojtyła / Pope John Paul II develops a rich understanding of the concept of person and of human personhood not by redefining “person” but by availing himself of the traditional definition offered by Boëthius who viewed the person as an individual substance of a rational nature.  Objections to this definition are overcome by Wojtyla’s deep understanding of the spiritual characteristics of reason and will.  The person acquires from these faculties one’s distinctive characteristics of freedom and creativity, which are manifest and fulfilled in one’s capacity for love.  Thus it is that although the person exists as a material substance in the world of physical things, one’s personal existence is constituted by relationships with other persons.

SPIRITUAL DISCERNMENT IN A SECULAR AGE

This essay explores the predicament of a secular age marked by atheism and calculative reason.  In a time that has been cut loose from eternity, the politics of calculation and of force separate words from the events and things to which they belong.  The confusion that arises permits the masters of empty words to rule everything with impunity.  Through the recollection of truth, which reveals itself in a moment that cannot be grasped, Beauty continually invites man to change his life.  The false prophets, negating this recollection of truth, create a new world that rejects God and is, thus, confined to its own immanence.  Symbolic thought and, therefore, poetic thought, is prohibited in this world and, because of this, one cannot pose the question about the meaning of human life.  Entrusting ourselves to the Beauty of the living God and the discernment of spirits are indispensable for bringing justice to ourselves and to the world.

GRACE AND GOOD:
A KIERKEGAARDIAN RESPONSE TO SECULAR HUMANISM

How does the question of grace–its reality or not–affect self-understanding and moral aspiration? Søren Kierkegaard believed that conviction of grace, or of divine kindness at the heart of things, is crucial for human flourishing.  This notion serves as a lever for critical reflection on perspectives concerning the secular turn Charles Taylor and others describe.  The essay contrasts Kierkegaard’s thought with Iris Murdoch, Philip Kitcher, and co-authors Hubert Dreyfus and Sean Dorrance Kelly.  Each of the secular perspectives, it turns out, maps onto a different one of three “stages” of human development that precede Kierkegaard’s highest, or Christian, form of existence.  This provides an angle for assessing secularism as reflected in three contrasting accounts.  Kierkegaard’s elaboration of the Christian ideal, and the shortfalls he saw in earlier stages, become the basis for a “justification” of grace as a premise for the well-lived life .